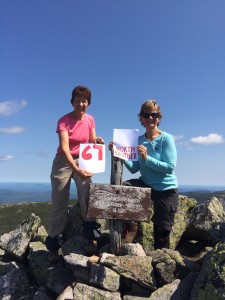 Autism makes us think we walk alone. The universe proves us wrong sometimes.

Look at this beauty of a day, and an accomplishment that made all the mountains sing. Nearly three weeks ago my guys Will and Jeff, and my hubby and I summited the last of New England’s four thousand foot or above peaks – called the NE 67 4K’s list. The feeling of making it to our first major hiking milestone, the New Hampshire 48 4Ks, three years ago despite autism or perhaps because of it, will buoy me for my entire life. Hitting our 67 was even better.

But there was another lesson that made our accomplishment smaller, yet greater – insignificant in a way, and yet so profound it’s still resonating for me today.

As we geared up in the parking lot, Debra approached us and asked to join us on the trek up our last mountain in the NE 67, because she didn’t want to hike alone. Turns out she was in Baxter State Park with a MeetUp group that rather ditched her because she only wanted to hike one peak, not 2 or 3 in a typical loop. Apparently they also preferred a faster pace than hers, and after a few days with her where only a few were willing to go it at someone else’s style, she chose to strike out in hopes of finding other partners on her final 67th hike.

That MeetUp’s loss was our gift. It turns out Debra was a fellow mom of a special child who lived a few towns over. Our paths were a little different – her kiddo has Down’s Syndrome. She achieved her 48’s and 67’s faster than us. OK she hikes and is probably younger and faster too. Our struggles with schools and supports were a little different but so common that chatting our our situations make a boring 3.5 mile ascent fly.

When we finally both hit that summit – there were few moments as sweet.

The message was loud and clear for those like me who don’t believe in coincidence. We’re not alone on the trails of life – even when rocks and roots trip us. Even when fear clutches as we look to some steep ascent ahead and question whether we have what it takes. Even when we think no one else understands.

We lingered at the peak for an hour, about 45 minutes of it taking over 100 photos. I’m not sure the group of 4 neurotypical 20-somethings, or the family of 3 who also summited with us, truly got it. But Debra did. Even if we never cross paths again, the earth, my kids, my companions and everyone around that day are the better for two small little parties of different people, each proving that we may be different – but we are not lost.

Milestones that are so savored become the fire that lights our next journey – especially for parents of special needs kids. Some people turn to Facebook and blogs like this to verbalize their pain with autism-parenthood to let it go. I need to articulate the promise, and the glory – because it’s what makes me believe in the beauty and joy I know around the corner in some other way, and that I hope to feel.

Today’s summit is more about chores, and rehabbing my bum left knee, and smaller scale growth for the guys. Jeff will get to practice attending during this painting job, while I’ll continue to try to both get Will to expand his range of interests, his clothing tolerance, and hopefully take steps to finding more meaningful work roles in the community for him.

My 67th makes me know we can do it. Debra’s presence shows we are an unseen army of the small and mighty, all doing the same.