What a week it was.  The Car Trip of the last post inspired a 25-minute naked protest inside Target’s changing room.  We didn’t end up at the chosen destination, the beach and the fried clam shack — partly because the weather had changed, but partly because W. spent so much time being naked.  The behaviorist’s input of the day before seemed off-topic as the antecedents, behavior and consequences were vastly different.  W. didn’t respond to motivators that worked just the day before and a new, defiant, probably typical 18-year old willfullness emerged that may have been developmentally an achievement of chronology over autism, but frankly was a pain in the *ss right about then.  What’s more, J. began siding with W. in the battle of wills against Mommy, even attempting to bite me to emphasize, I suppose, that W. really, really does not like wearing clothes.

And I was alone, no hubby to help take a break from the fun – or at least share in the black humor of such lovelies as when your 18-year old strips in public, and hasn’t a clue that this is not a good thing.

Yet here we are, a full week later, as breezes rustle the hair on my writing-arm in the white walled calm of our beach motel at Cape Cod.  Nature can be such a reflection of the soul.  It reminds me that yes, we did survive last week – somehow – and we will do the same again today – even with autism.  To his credit, the following day of Sunday 6/24 for W. was better than the day before.  True, we had protest strip-downs whenever I mentioned the word Church (sorry God, I really did try to make it to Mass) and even when it was time to wear the bathing suit prior to the car trip to aforementioned beach. Maybe that’s because these were Mommy’s agenda items, and not W’s.  However help arrived (yay!) in the form of a long-unavailable respite worker, one of my absolute favorite, who managed W. and J. at a graduation party of a friend’s daughter.  I also felt the love of two friends there who came over to me, shared my commiseration and one reminded me that during tough times, your daily action item list should have Just One Thing.  As any of you who know me will attest, my weekend Chores and Fun list is a black-scrawled 8 1/2 x 11 with zero white space in the margins.

Monday through Friday, thankfully, had the structure of 3 field-trip camp days for W. and two at-home days with a beloved babysitter.  The first two camp days were OK.  The third day never happened because he spent a full hour on the toilet while throwing apparel willy-nilly across the bathroom, for the camps staff to retrieve and plead like a game.   The  2 at home days were the opposite – happy, mostly well-behaved, albeit with an amazing new pastime of whipping off the pants, the underwear, then re-donning the pants so fast that no one knew they were gone except me, who’d find them in sensible locations where every other family stores men’s briefs like the magazine bin.

Going Commando – that’s what my lovely new social worker at the state DDS agency called it.  The word makes me think of the weapon I’d theoretically wield with him when my beloved naked boy gets like this, only I’m a pacifist, so the only weapon I really use is my voice, which my typically developing daughter will probably tell you can be worse than an Uzi.    My mission according to the behaviorist last night, is to spend the next 5 days or so training W. that underwear is good.  Of course this sets up the essential conflict, of W. versus Mom – Commando versus Captain Underpants.

My blog is new, so not many readers/comments, but dear reader whoever you are, offer a thread of wisdom if you can.  Mine lies in a belief that we all have a deep sense of knowing what is best for us, however flawed our behaviors.  So my mission today, and tomorrow and always really, is to help W. find a way to honor whatever is going on with the Commando stuff, while habilitating his behavior in accordance with the real world. Tall order at times, it seems.  I just peeked across the corner and asked W., who’s lying in the motel bed, if he was wearing underwear, as I spied one of the new 10 or so pair lying on the floor.

My brow furrows, I snicker at his honesty, and I feel the pang of having to stop writing and start living a life that is often not what I want it to be.  I close out this moment knowing that the next time I write – there will most definitely be a story to tell – and somehow, somewhere, a breeze that brings inspiration.

One of my sons’ favorite phrases is Car Trip. It connotes a step outside the cocoon, a departure from the ordinary, and usually treats and pleasures. Today I gave them a choice of basketball at the new gym and a trip to Chipotle, or the ocean and clams. Thankfully they picked the one I wanted, too.

So we’re off! After a few obligatory chores. Yes I am always that kind of mom.

What a catchphrase for today, and for all of us who parent adults with autism – Becoming Remarkbly Able, by Dr. Jackie Marquette.  I hear her speak at an autism conference and marveled at the growth she achieved with her son Trent.  Even more notable is that Trent’s autism in many ways is the classic kind.  No offense intended to anyone, but with higher functioning autistic individuals who can speak, write, drive cars and attend college – it’s easy to profile their achievements, because they are much like our own.   Less common is the celebration of the more challenged.  Trent, from Jackie’s accounts, has needs which she characterizes as “significant.”  Yet at the time I attended the conference, Trent’s artwork business as sold on greeting cards and prints was flourishing to the point he was acheiving a little steady income stream from it enough to pay for a portion of his living needs, if I recall correctly.   That’s absolutely huge, at least for parents like me who struggle to help our teens and young adults acheive gainful employement, and worry about their life path without it.  Trent and Jackie are a beacon  as I work to uncover the unique strengths in my guys.

Listen to the acceptance and love for what is unique in her son, from the publisher’s description of Jackie’s book:

“The Walking the Path Model© is a system of ongoing assessment and action steps that promote the individual’s participation, emotional support, and growth. WP is about identifying talents and strengths, then transferring them into tangible forms. It’s all about finding and pursuing that hobby, that activity, that job, or that subject to study which makes the heart sing. How can this be done when a person’s needs are significant? Supports are identified and negotiated to help lift and link the individual to full involvement and participation.”

Like an old friend just rediscovered, I’m eager to pore through Becoming Remarkably Able.   We are all remarkably able, if we have the vision to see it.

Some days, life’s a beach; on others, it’s a workout, you sweat and come home muscle-tired, but with that toned feeling that carries you through. That’s us this week.  Here on Day 4 of vacation, not that I’m still counting, we SURVIVED the first relatively unstructured few days!  Yay!  Despite near-100 degree heat, thorny behaviors and too much work stress and work.  Brief lessons for this mom:

Some days you work it; some days it works you; and others, you endure even more because of the strength you built from sweating the small stuff – literally.

Inspiration comes from many places.  Here’s mine. 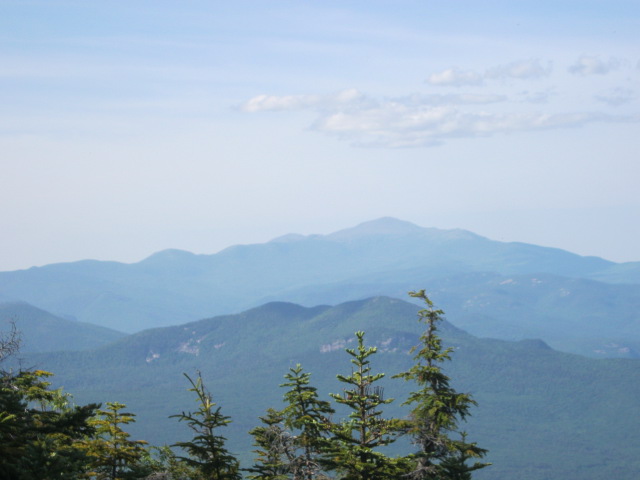 What a better metaphor for the vision we gain from summiting an autism moment – and for the sweat and often grueling slog up the hill that makes it all worthwhile.

As anyone who knows me outside my pseudonym, I love hiking.  We discovered it one sunny summer day when the boys were about 6 years old.  It made them sleep, it was a family activity that everyone could join, and it offered immense rewards:

I so loved the above photo, taken last weekend, that I made it my iPhone wallpaper.  That’s one of the best things I’ve done in recent memory.   It’s my daily reminder of something I found in which my guys excel – which connects them to the neurotypical world of likeminded people – and which has helped them grow.

Two days ago we bagged peaks #37 and #38 of NH’s Four Thousand Foot or higher peaks.   There are 48 in all, and we are aiming to complete them so we can join the Four Thousand Foot Club.  Over 10,000 hikers are members according to a recent article, and while no one keeps official records on such things,  our goal is that the boys become members, which will make them one of very few, if not the first, autistic members.  I used to value that possible “first” more than I do today.  Now, when we have only VERY challenging peaks left, mainly between 10-18 miles long each, it’s all about the journey.

And isn’t that the truth, my friends.  With autism and in life, it doesn’t matter the end you journey toward – the journey is all that matters in the end.

Tomorrow starts our 3-week vacation journey, as in no school for 3 weeks, and no daily structure of the known.  I use the word journey quite mindfully. When we hike to a mountain I check the weather, vary the gear, refill the body fuel (ie. snack) supply.   WIth this vacation mountain, I’ve made vows, scribbled lists of my objectives and structures for the week, tried to get staff and helpers scheduled.  I said prayers too, because only God knows how I’m going to work, manage the boys and deal with respite worker cancellations which constantly mean I am in a tizzy trying to do all things for everybody.

But no matter what – there is some mountain ahead of us, and this blog as well as my iPhone talisman are my reminders that we will reach that summit – and with it will come new skills, joy, and peace.

So come along daily with me for the next three weeks.  Check back, and join us – no matter where you are on your path.   We will enrich each other’s views from the top.